QNI Officially the Oldest Nursing Charity in the World

Community nursing charity, The Queen’s Nursing Institute, is delighted to announce that it has officially been confirmed as the Oldest Nursing Charity in the world by the Guinness World Records.

The QNI is ‘Officially Amazing’ at 132 years old!

After a nine-month application process, the charity was presented with a certificate from the Guinness World Records earlier this September.

To read more about the QNI’s history, go to our heritage website. 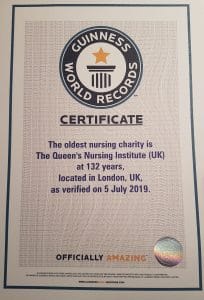 132 years ago, William Rathbone and Florence Nightingale determined that nurses who worked in homes and communities require specialist education and training to do their work; to work autonomously and to manage the risk for both themselves as Queen’s Nurses and the communities that they served.

Back to News
Close