Home / Blog / Privileged to work with rough sleepers in Birmingham

Privileged to work with rough sleepers in Birmingham

A homeless man reading a book while in his sleeping bag

I was invited to go along to a training session and asked if I would volunteer to help with the winter night shelter at local churches in Coventry from December to March.

So, at the beginning of November, I went to St Osburg’s church hall for my first shift, a little apprehensive but willing to help wherever I was needed. I began to learn what it was like to be homeless, by meeting those who live on the street in all weathers, with little hope for a change in circumstances. It would give me valuable insight into the daily struggle just to exist in such harsh conditions. It is estimated that on average rough sleepers will die before they are 47. Birmingham and Coventry have the highest number ever of rough sleepers and the numbers are rising.

I worked on the evening shift, helping to set up the guest beds, provide vital clean underwear, clean clothes and toiletries, and help serve a hot meal. We also tried to create some sense of community by spending time talking, playing games and talking, without being intrusive, with the guests who stayed at the shelter. I met some wonderful volunteers who work tirelessly to try to signpost people to get help with finances, jobs and permanent accommodation. 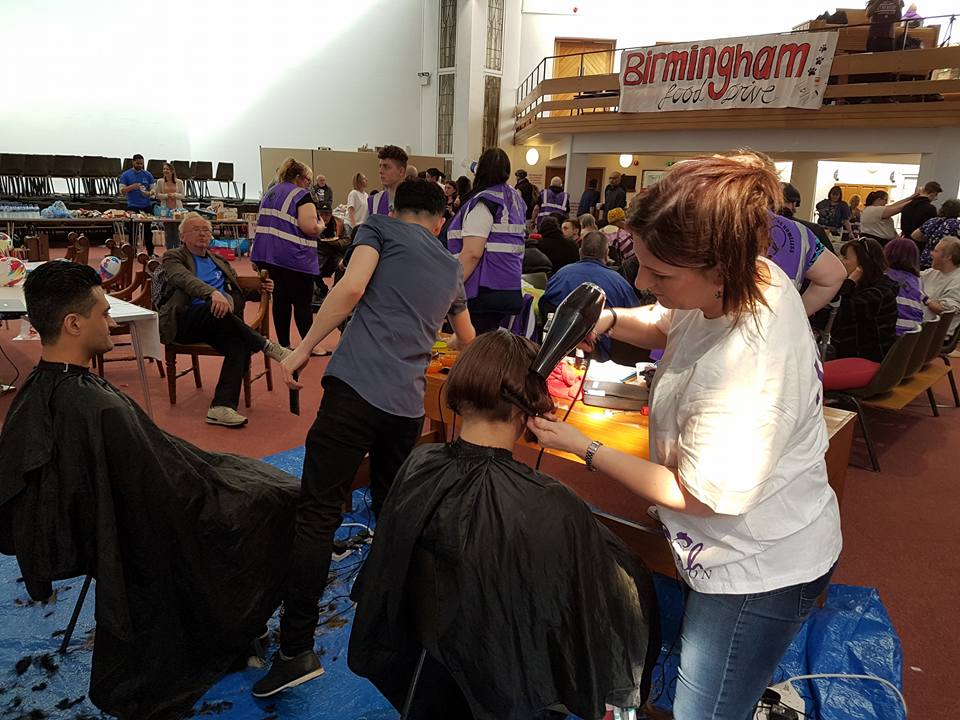 Soon after, I was invited to join a small group in Birmingham to walk the streets and find rough sleepers. The small group would collect donations of clean underwear, warm clothes, toiletries, sandwiches, hot drinks, sleeping bags, and walk the streets to find those most in need, often hidden from view in doorways, under bridges, subways and car parks. We were able to speak to them to find out what they needed to try to make things a little more bearable, if only for a short time.

Paul, a youth minister in Birmingham, helped organise the group on a monthly basis over the Christmas period. However we noticed more people out on the streets and more volunteers joining our group, so we decided to continue the outreach, as the winter night shelters would be closing at the end of March and more people would be forced out onto the street.

As Paul moved on to pastures new, I and a friend Laura helped co-ordinate the group, which we called Hope for Homeless Birmingham. Our outreach group would gather donations and then meet to distribute items. We split into two smaller groups to cover more ground and meet more people, and we soon learned the areas where the rough sleepers would be and where need appeared greatest. We then used social media to ask for donations and encourage others to volunteer, even as the weather became warmer the streets uncovered more rough sleepers. 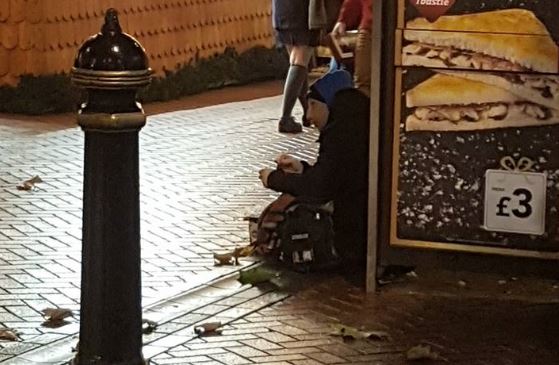 We made it our mission to ask the names of all those we met, ask them a few questions about having a bed for the night and what things they needed. We realised from talking to them how scared they were as night fell: often their belongings are stolen, some choosing to sleep in the day as it is safer then. By knowing their names and introducing ourselves we often shook hands and even hugged, which highlighted the need for human contact and mutual respect.

There appeared to be a community within the rough sleepers; they would look out for each other, they would also warn us about certain people and to make sure we were safe. We shook their hands and offered to pray for them. We would ask if there were items that we could bring on our next visit. We got to know lots of regular rough sleepers; sadly you see the deterioration in their general health and physical condition as the months go by. Many have open sores and wounds, some from being assaulted, some from the extreme weather conditions in which they sleep. Baby wipes have become the most versatile item for both volunteers and rough sleepers. They have access to a GP surgery specifically who supports rough sleepers with no fixed address and are encouraged to attend to have their wounds cleaned and for general health checks.

Many have stated that they are abused verbally and physically, had their meagre belonging stolen, and even raped. They are brutally honest about how they were taken advantage of and seen as less than human.

“Offer your hand, not your judgment.”

A lady said she was a drug user, had been clean for 18 months but was still regularly approached by drug dealers. She admitted to having an occasional can of beer: “Well wouldn’t you, you need something to help you sleep.” She also warned us to be safe: be careful not to get needle stick injuries and to stay together. She had found a friend dead on the street and this had affected her mental health. She said she was scared for herself – she didn’t want to end up like her friend. We have met Tina many times; when we don’t see her, we ask around to ensure that someone has seen her recently and that she is alright.

A young man, who was from Manchester and admitted to being an alcoholic, had a relationship breakdown and lost his accommodation. He felt his family had given up on him and he had been a problem to them and an embarrassment. He had not had a drink for over a year due to being a rough sleeper and he was now too proud to get in touch with his family. We tried to encourage him to speak to them even if it was just to let them know he was alive and take it from there.

A young lady who was with her boyfriend, who had been pregnant and had a miscarriage at 26 weeks. She was discharged from hospital in blood stained clothes to return to the streets, as she didn’t want to leave her boyfriend. On one occasion they were in a tent under a carpark – they had very few belonging and were hoping to find a flat once they got their benefits sorted. Another time her boyfriend was barely able to wake up and Gillian had gone to beg for money to help pay for bed and breakfast for the night. 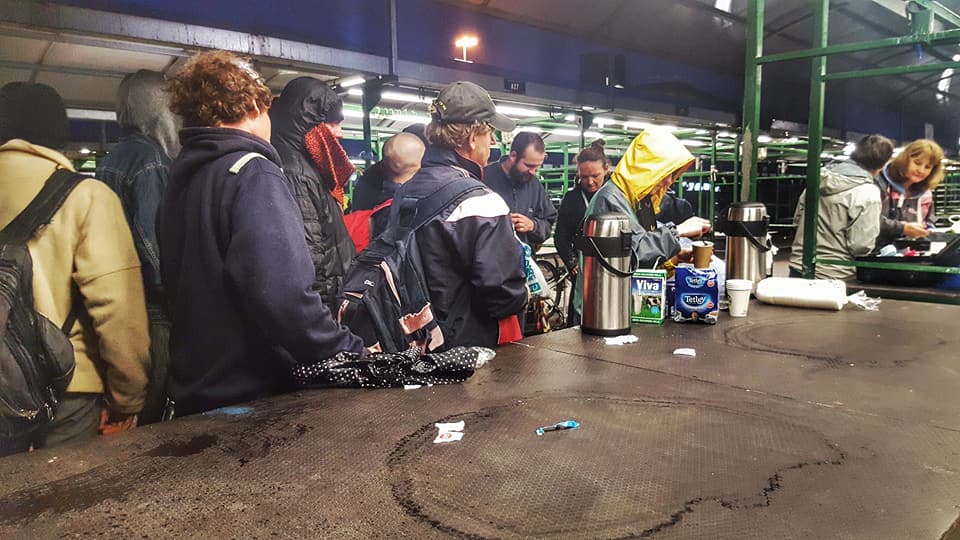 Everyone we met was so grateful for everything and only took what they needed. We were aware that we were doing very small things to help. As the weeks went on and we gathered in New Street Station, the rough sleepers would begin to approach us. This was great as we felt they trusted us enough to come and ask for what they needed. ‘Angels with wheels’ we were called, as we bring our supplies in a little trolley so we can carry more items to distribute.

Now we have had quite a good summer, yet the needs of those that sleep rough do not change: they still need sleeping bags, blankets and warm clothes. We have met many groups who provide hot food through the soup kitchens, but they have to eat the food there and then, so we provide snack packs and wrapped sandwiches, bottled water and drinks so they have something for the later. They crave sugar and salt to give them energy – we cannot give out enough tea coffee and hot chocolate. One summer evening, one of our group went and got milkshakes for a small group of men and they were so delighted it was lovely to do this little thing to bring a smile to their faces.

It is extremely humbling to be able to give a little time and comfort to those most in need.  We would offer to pray for them and they would often say, “God bless you for what you’re doing”, yet we felt totally inadequate. Sometimes spirits were high and other times people were feeling low, so desperate that you wanted to take them home. It was a struggle for us to walk away, if only we could do more. We have learned so much about them and their need to feel loved and wanted by society.

So we now prepare for autumn and winter, gathering more donations as friends and family have a summer clear out. We continue to welcome new volunteers and with more volunteers to reach more rough sleepers. Many volunteers initially feel quite nervous and are shocked by what they witness, but each one returns time and again because although it is hard your first time, the need to help others is far stronger than the apprehension they feel.

In June I took part in the Birmingham food drive which was a great event. Some of our regular volunteers joined me as we spent a full day helping to distribute clothes, food and other items; it was an opportunity to meet other charity groups working in Birmingham who provide lots of services including a free haircut, health checks, even food supplies for dogs which many rough sleepers have. Carrs Lane church hall provides a welcome place and a large room buzzing with activity, with volunteers and homeless people working together.

July presented the opportunity to volunteer for the first permanent night shelter in Birmingham, Tabor House. After attending an information session I was accepted as one of the shift leaders for when the shelter opens in late September. This is a great opportunity to work with other volunteers and be active in helping rough sleepers to change their circumstances.

I believe I was guided to help as a volunteer; I have been nursing 33 years and embrace the challenge to continually experience new areas of need, to bring my nursing skills where they are most needed, but above all to be compassionate to both those we meet and ensure the group were well supported and felt safe at all times.