Beacon House has been providing primary health care to the homeless in Colchester for over 15 year including, occupational therapy/social work/housing/debt advice and substance misuse support. A local CCG grant funds Beacon House to run the service. 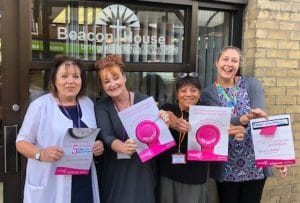 The centre operates a nurse led drop in clinic providing comprehensive health screens to people experiencing homelessness alongside treatment of minor illnesses and injuries, health promotion and screening for various chronic conditions. There is also a visiting podiatrist and dentist.

In 2019, the Nurse led team became aware that females presenting for routine health screens at the clinic, often indicated they had either a) previously had cervical screens but were unaware of the results, or b) had prior results which had required actions but they had never accessed follow up, or c) had simply never attended screening.

On further exploration, nurses found that there was limited data / information published specially related to cervical screening rates for the homeless population within the UK. However, given that cervical cancer risks factors include being in a lower socio-economic group, being a smoker, commencing sex at an earlier age and/or having multiple sexual partners, and not accessing HPV vaccination (all common in homeless populations), the team felt further action was required.

The nurses completed an audit which showed that cervical screening take up within their population as 28 % in comparison, with the national rate 2015 of 73 %. Exploring the background to this finding, the team found the common reporting barriers to screening as;

With a clearly identified gap in provision the nurses contacted Public health England, and the Jo’s Cancer Trust for advice, with a view to commencing a cervical screening service for homeless women at the clinic. This has resulted in the setup of a pilot ‘screening hub’ which has started offering opportunistic screening for females on a drop on basis alongside its standard sexual health services.

Patients are initially offered a pre screen chat in which to discuss the procedure and to help address any fears/feelings/embarrassment they may have re screening from a previous experience. Then patients are then encouraged to attend a ‘drop in’ clinic. Posters in waiting rooms and toilets help raise awareness and promote screening. Alongside these materials the centre additionally offers ‘general health promotion activity days’, covering a wide range of topics including the screening service. Over the next 12 months the pilot aims to increase cervical screening uptake in the homeless by 50%, and the results of the pilot will be reported.