Home / Blog / Where words fail, music speaks: the language of an extraordinary QN

Where words fail, music speaks: the language of an extraordinary QN

I’ve just pulled up outside a house in a leafy suburb on the outskirts of Eccles, Salford. At the door is an older lady, smiling and waving. We’ve never met and already I feel we have much in common. For this lady is an extraordinary Queen’s Nurse and my senior by some 34 years.

It started when I emailed June Smith, who was until recently the co-organiser for a community organisation called Singing with Dementia. I’m currently putting together a bid for funding to do singing for lung health across Salford and emailed her, asking whether we might collaborate. June replied saying that she was retiring from the group, being 94 next month and recovering from a recent operation. She added how delighted she was to be contacted by a fellow QN. It took me precisely 3 seconds to decide that we had to meet.

June was born in 1927 in Victoria, Australia. She started her training at Alfred Hospital in Melbourne in 1945 with 17 others and had kept in touch with them ever since. She shows me a picture of them all, smiling in their uniforms and aprons. By 2003, she’d noted on the back of the photo that there were 7 of them left. In a footnote in 2021 she adds poignantly “Only me left now.”

June moved to Greater Manchester after her marriage. On 16th September 1966, clutching her P45 and insurance card, she reported to superintendent Miss Keogh, at Harpurhey District Nurses Centre in Manchester, to start her district nurse training.

“In those days, district nurses rode bicycles,” she tells me. ”If you had a car you were lucky. I remember my friend Margaret Molloy – red curls on top of her head – she’d run up the stairs carrying her bike to see her patients.”

“We’d nurse the whole family, taking into account the harsh social conditions that surrounded them. Collyhurst had a lot of poor housing, with adults often having multiple labouring jobs. I found working in people’s homes both satisfying and rewarding. We’d do everything: bathe them, feed them, cut their nails.”

I tell her that sadly some of those harsh social deprivations still existed. She looks at me aghast as I told her of a father I know that had to borrow 50p from another dad one night to feed the meter so that his children didn’t wake up in the cold.

In the 1960’s district nurses were not allowed to work in twos: “One day I needed to lift a heavy patient, so I enlisted two workmen off the street repairing the gas pipes to come and help me.” I asked if she had back problems: “No I don’t”.

Aseptic technique she explains, was basic but effective:

“We didn’t have dressing packs. We’d teach the patients how to make their own. They’d get cotton wool and gauze on prescription and put them in a metal biscuit tin and they’d bake the tin in the oven – often until the cotton wool went brown.”

“We also had a certain way of folding newspaper to make a bag for the used swabs. We’d burn them – and incontinence pads – on the fire. I set fire to a few chimneys in Collyhurst in my time!” she adds with a grin, “but we never had any cross infection”.

I was watching TV one night and saw a guy playing the violin and people with dementia came alive and I thought, my God, we can do that!

I reflect that her description of person and family centred care in community nursing and that spirit of invention and calculated risk-taking still prevails amongst Queen’s Nurses. In my own practice of social innovation, I’ve had to take my own share of risks, such as driving a convicted armed robber and kidnapper that I’d only just met (but risk assessed) to a project supporting former offenders, so that he would have a Christmas meal. On that occasion I told the guy that if I didn’t ring my boss at 12.30pm precisely the police would be looking for us.

On the 17th September 1967, June completed her training with the Queen’s Institute of District Nursing, with distinction. Later she went on to be a tutor in district nursing in South Manchester and later, became a magistrate, serving on the bench for 20 years.

June’s husband, who sadly died over a decade ago, developed dementia. We swap tales of coping with family members with dementia. Both of my parents developed the disease too and my sister Christine and I had to seek help from the voluntary sector so that we didn’t slip into mental illness ourselves.

“I was watching TV one night and saw a guy playing the violin and people with dementia came alive” she says, “…and I thought, my God, we can do that!”

June went to meeting in Eccles organised by Age Concern (now Age UK) to find volunteers. That day, she met another would-be volunteer called Diane Greaves and together they decided to set up a musical support group for family members with dementia. They were initially offered space at the local Citizen’s Advice Bureau and later a room at the Humphrey Booth Resource Centre in Swinton.

“It was a lot harder than I thought,” she muses, “…it took about 2 years to set up properly. We approached everyone, we applied everywhere. Age Concern found us a piano and then we found a guy to sing.”

Ten years on, Singing with Dementia is a huge success. June and Diane have raised over £90,000 and this helps to pay for professional musical support from the charity Music in Hospital, for refreshments and for the Christmas parties. In the last 3 years, 5,000 people have attended the weekly singalongs and social events, with an average of 70 people turning up each week.

“It’s unbelievable to watch them,” she smiles, remembering those whose dementia might mean that they normally never speak. “They sit up, they know the words and they sing it all way through. The effect of music on the brain is extraordinary.”

June talks about how the group offers a safe, happy and welcoming environment:

“If family members swear, or are incontinent, it’s accepted and this allows people to relax and enjoy themselves.”

June and Diane have created a refuge for carers who live with 24-hour stress. Their work attracts students from as far away as Canada and Sweden, who come to study their approach. Now they are handing over their group to the next generation to carry the work on.

I light candles on a little lemon drizzle cake that I brought and photograph June blowing them out. “It’s not my birthday till next month!” she exclaims. Then I ask her for a selfie with our QN badges on, because I’m already planning to write this blog about her, ready for when it is her birthday.

June Smith is a pioneer, someone who fights against the odds, invents new ways to help others and never gives up. She is an important part of our shared community nursing history. I think she has been alone with her memories for too long. My hope is that together we can help June to celebrate her 94th birthday by remembering and celebrating her work and by carrying forward her indomitable spirit.

To find out more about June’s work, visit www.singingwithdementia.co.uk 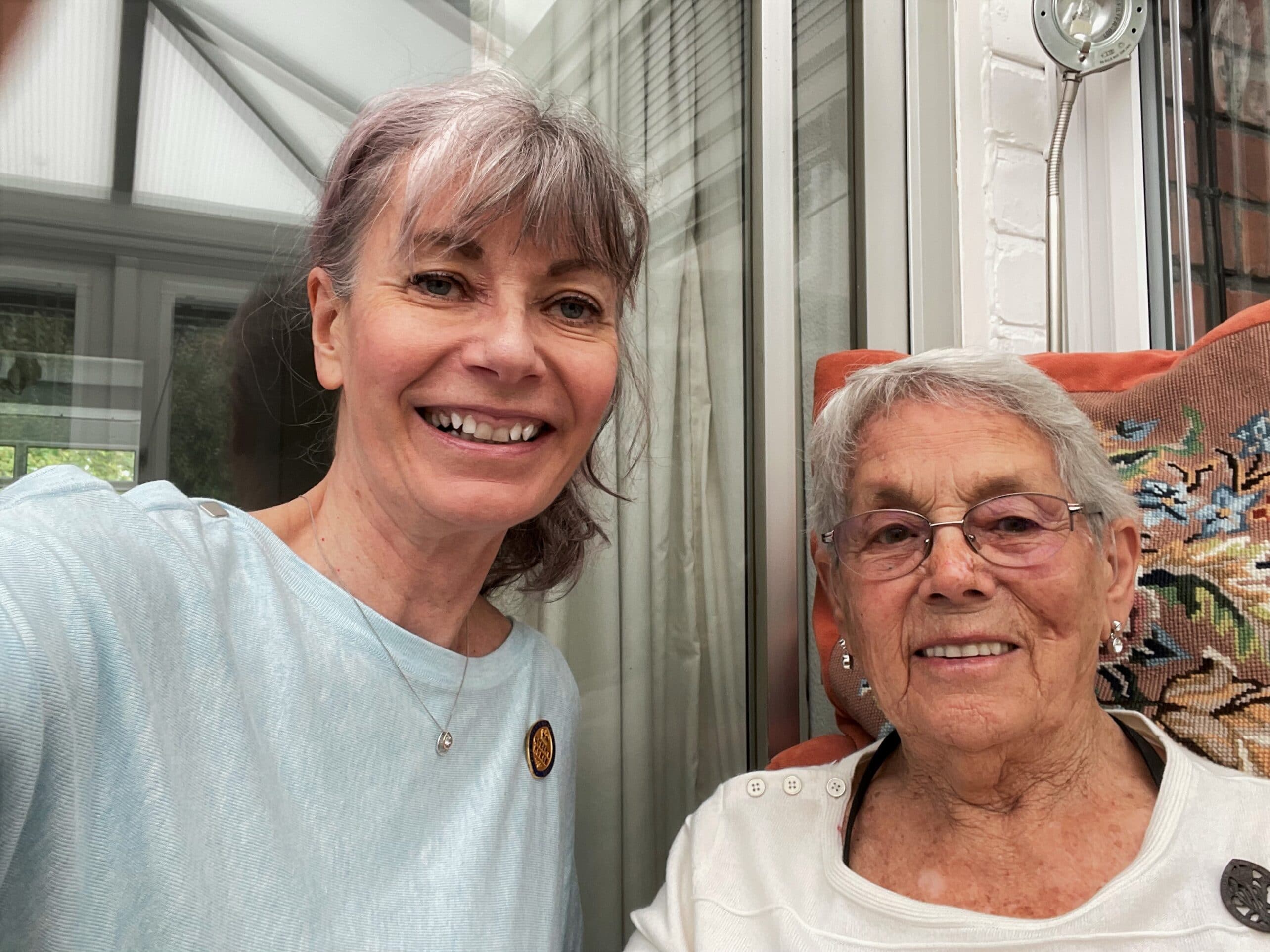 This website uses cookies to improve your experience while you navigate through the website. Out of these, the cookies that are categorized as necessary are stored on your browser as they are essential for the working of basic functionalities of the website. We also use third-party cookies that help us analyze and understand how you use this website. These cookies will be stored in your browser only with your consent. You also have the option to opt-out of these cookies. But opting out of some of these cookies may affect your browsing experience.
Necessary Always Enabled
Necessary cookies are absolutely essential for the website to function properly. This category only includes cookies that ensures basic functionalities and security features of the website. These cookies do not store any personal information.
Non-necessary
Any cookies that may not be particularly necessary for the website to function and is used specifically to collect user personal data via analytics, ads, other embedded contents are termed as non-necessary cookies. It is mandatory to procure user consent prior to running these cookies on your website.
SAVE & ACCEPT

The QNI office is currently closed. For contact information, close this message bar and click Contact Us in the top right of the screen. For Coronavirus information and links see: www.qni.org.uk/news-and-events/news/support-to-nurses-against-coronavirus/ Please also note that our online shop is not taking orders at this time. Dismiss